At ZoneCreative we are all well aware of how fundamental the soundtrack of a video is, to convey emotions according to the director’s intent.
In our world too often the “audio department” slips into the background compared to the images, almost as if it had less importance on the final result, but it is a serious error (and unfortunately very widespread) that almost always derives from the poor skills of those who has decision-making power over budgets.

In reality, if we talk about emotions, it is precisely voices, noises and music that are the masters, it is enough to see how complicated and structured the audio department of a film production is to understand that this is a far from superfluous expense.

In Soeliok’s case, we always knew it was going to be an important job to add the stage sounds, what we didn’t know yet was how challenging it was.

First of all, you immediately find yourself dealing with an ever-present audio stream: the narrator’s voice. The dynamics of the sounds, just like for the soundtrack, must therefore respect a reduced interval compared to the main sound line and this condition immediately places a series of creative constraints on the types of possible sounds.

For example, imagine a scene at the cinema in which a motorcycle approaches the camera, skims the observer and then drifts away. Those who deal with sound design know that they will be able to manage the roar of the engine with a volume curve that will start from the pianissimo, will rise towards the fortissimo at the point where the bike is close to the camera, and then return to lower the volume when the bike moves away.

Now let’s think about replacing the images with a voice that describes the scene. If we superimpose the flow of sound design on the narrating voice, the result will be an unlistenable mess in the central part, as the roar of the engine will make the actor’s words incomprehensible.

This problem immediately makes us understand that we will never have that total freedom of action and if we do not want to give up a correct sound description we will have to strive to make listening enjoyable.

Turn down the volume!

Fortunately, there are several solutions that come our way.
The first is certainly to reduce dynamics and, in the case of the bike, keep the engine volume lower in the central phase of the scene.
But lowering the volume is not enough. If you want to obtain a pleasant and harmonious effect, you need to think with the frequencies, exactly as the mixing technicians do in musical productions.
The theory in fact teaches us that to keep the narrator intelligible it is important not to superimpose other similar frequencies. Here the skilled sound designer, when he wants to give more dynamics to the scene, will look for higher or lower tonal alternatives than that of the narrator to cover the entire sound spectrum and give that sense of fullness to the listener, without making the scene confusing. or difficult to follow.

These operations require a certain artistic sensitivity, always at the service of the direction and the quality of the fruition, but also a certain technical competence which fortunately today is supported by a series of really effective tools and controls.

If this double level of artistic-technical operation is respected, very interesting results can be obtained, capable of giving great added value to the final product. 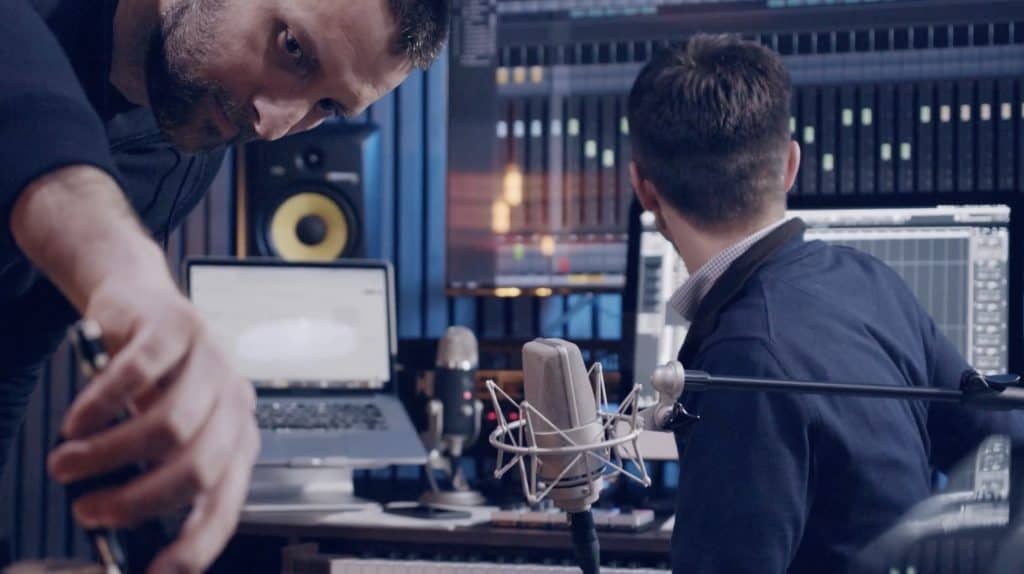 The relationship with music

Let’s also not forget that stage noises do not have to deal only with the narrator, but also with the soundtrack and can you imagine? Things are by no means simple.

The dynamics problem remains the same, but there is another unexpected difficulty linked to acoustic perception. In fact, the composer chooses with great care the sounds, timbres and tones of his staff in the orchestration and certainly the sound design cannot move impassively by pretending that the two flows do not influence each other.

But how do you choose the sounds and noises during a soundtrack?

To understand this we need to take a small step back and analyze the difference between sound and noise. We ask the Treccani dictionary for help for the two definitions:

the cause of the acoustic sensations transmitted through the air excite the ear.

…it is used above all for sounds that are subjectively judged to be non-musical or that are in any case unpleasant, annoying, annoying.

Already from the meaning of the words we understand that the world of noises is more distant from music than the world of sounds.

But acoustic physics specifies that the difference between sound and noise is mainly related to perception. The sound wave can in fact be regular, and in this case it emits a tune sound, or it can be irregular and emit an untuned sound, called noise.

So here we have a useful tool to find the right compromise in every situation:
In fact, we know that a noise can be annoying in terms of dynamics or overlapping of the sound frequency, but it will hardly conflict with the harmony or melody of the music.

However, since sound design and composition work are two parallel professions, it is not possible to have a universal synchronization protocol. It is therefore essential that the sound designer keeps in mind during his work of all the possible regions in which his intervention could be dissonant with the future soundtrack.
In most cases we have handled these situations by modulating the sounds in the mixing phase, to tune them with respect to the music.
In other cases, Alessandro Ponti, instead, ventured into real orchestral prodigies and proposed to generate some sounds directly through composition techniques with truly incredible results. 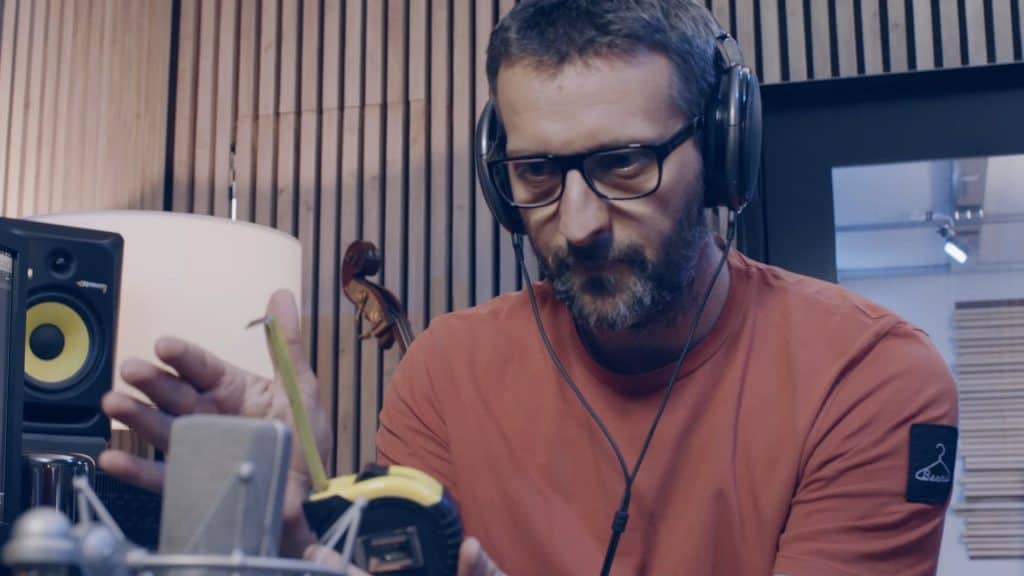 Personally, this work made me understand that the reality who writes music for images must have an excellent knowledge of sound design. Think for example of the typical musical descriptions of Tom &amp Jerry in which the orchestra reproduces all the sounds, through the conscious guidance of the composer. Of course, in this case the whole stylistic discourse dedicated to the type of emotions opens up. Since for the music we had already chosen a more “vintage” context linked to the soundtracks of the 90s, we preferred a more modern and cinematic approach to sound design, but the more attentive ears will certainly notice here and there some orchestral intervention that brings the irreplaceable signature of Maestro Ponti. 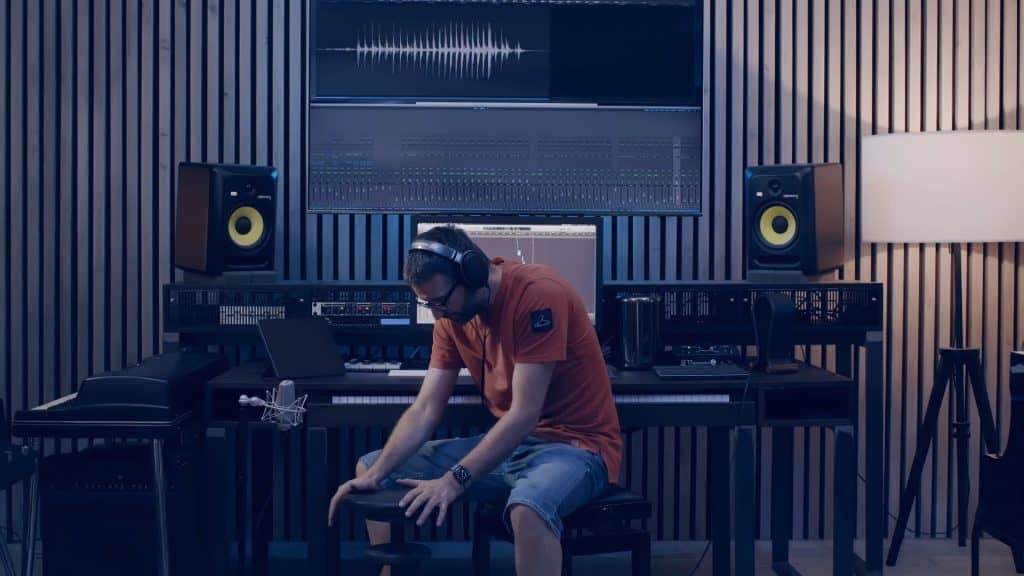 Anyone who has to manage the sound description of a story will be faced with a difficult choice. Do I record each sound individually or do I use one of the many libraries available? After various reasoning and testing we have opted for both solutions. We relied on the Soundly platform (which interfaces perfectly with Logic pro X) for all the basic sounds: steps, doors opening, gears, mechanisms, ambient noises, etc … But for more specific sounds like the roar of orkran, the noise of the spring motors of the flying vehicles, the sirens of the watchtowers, etc … we exploited the potential of our well-equipped studio and we activated various recording sessions. It was also very useful to record ad hoc in all those scenes that required a series of sounds that were produced in rapid sequence in the same sound context. For example, in the scene where Gaman opens the door of grandfather Eldur’s study, runs through it and jumps into his arms, clinging to his beard. I tried to insert all the single sounds one after the other trying to equalize the levels, but the result was rather cold and unrelated. I therefore prepared myself by placing the microphones in space and physically reproducing all the gestures of the young dwarf. The result was much more believable and the scene acquired a whole new value. 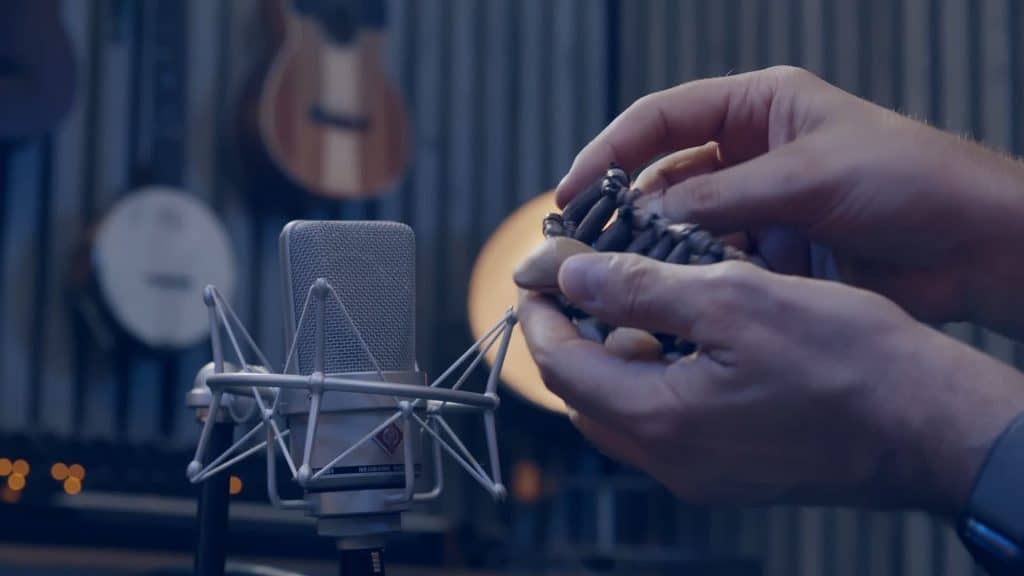 Another fundamental aspect of musical sound is the choice of the reading rhythm. In fact, when the actor reads, he makes natural pauses linked to his personal interpretation of the story.
We were lucky enough to have a great professional like Carlo Valli and the direction of the dubbing was a real walk.
During the recording phase, I took care of the main pauses, the most pressing moments and we tried to manage the intention of reading in line with that same directorial vision that then guided the composition of the soundtrack as well.

During the sound design phase, however, I had the opportunity to change the pace of reading in favor of understanding or the emotional situation.
In some particularly tense passages I lengthened the pauses between paragraphs by covering the silences with long and deep sounds. At other times, however, I dried the pauses between words made the reading more sparkling by accompanying it with a series of short sounds that would then marry with the orchestra.

From this point of view I was really happy to have personally supervised the sound design, precisely because I was able to take liberties that a technician could not manage without the author’s authorization.
I was able to add small subtleties in the intention of slowed reading and speeding up the rhythm in relation to the choice of sounds or by creating the necessary spaces to insert even very loud noises without making them superimpose on the words of Carlo Valli.

The final product is the result of over 200 hours of work (for book 1 alone) and a dizzying amount of overlapping sounds and tracks.

But what the guys at ZoneCreative have been able to achieve is an immersive experience almost closer to the cinema than to reading. A one-of-a-kind audiobook, taken care of in every aspect and able to make listening to a true and unforgettable adventure.